In my last post I talked about breadboarding a 6809 single-board computer; well, in the last three months I’ve taken that one step further, and I am proud to say I have finally achieved my goal of building an SBC based on an original design. Allow me to present COLE-1: 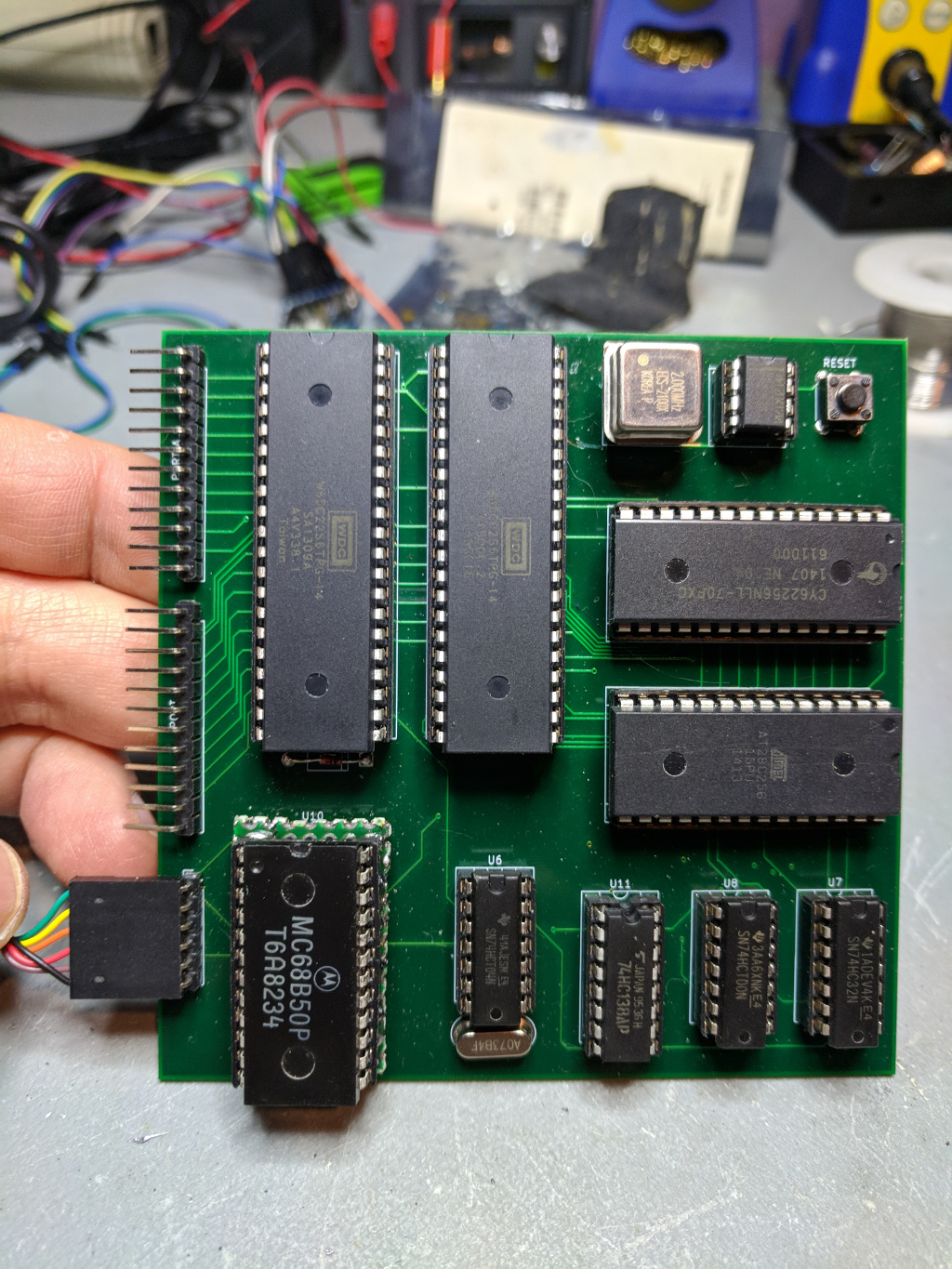 All of my design work (schematic and board layout) was done using KiCad, and the boards were manufactured by PCBWay. It’s a four-layer board (my first) with internal ground and power planes. Here are a couple of photos of the bare board; as you can see the manufacturing quality is quite good: 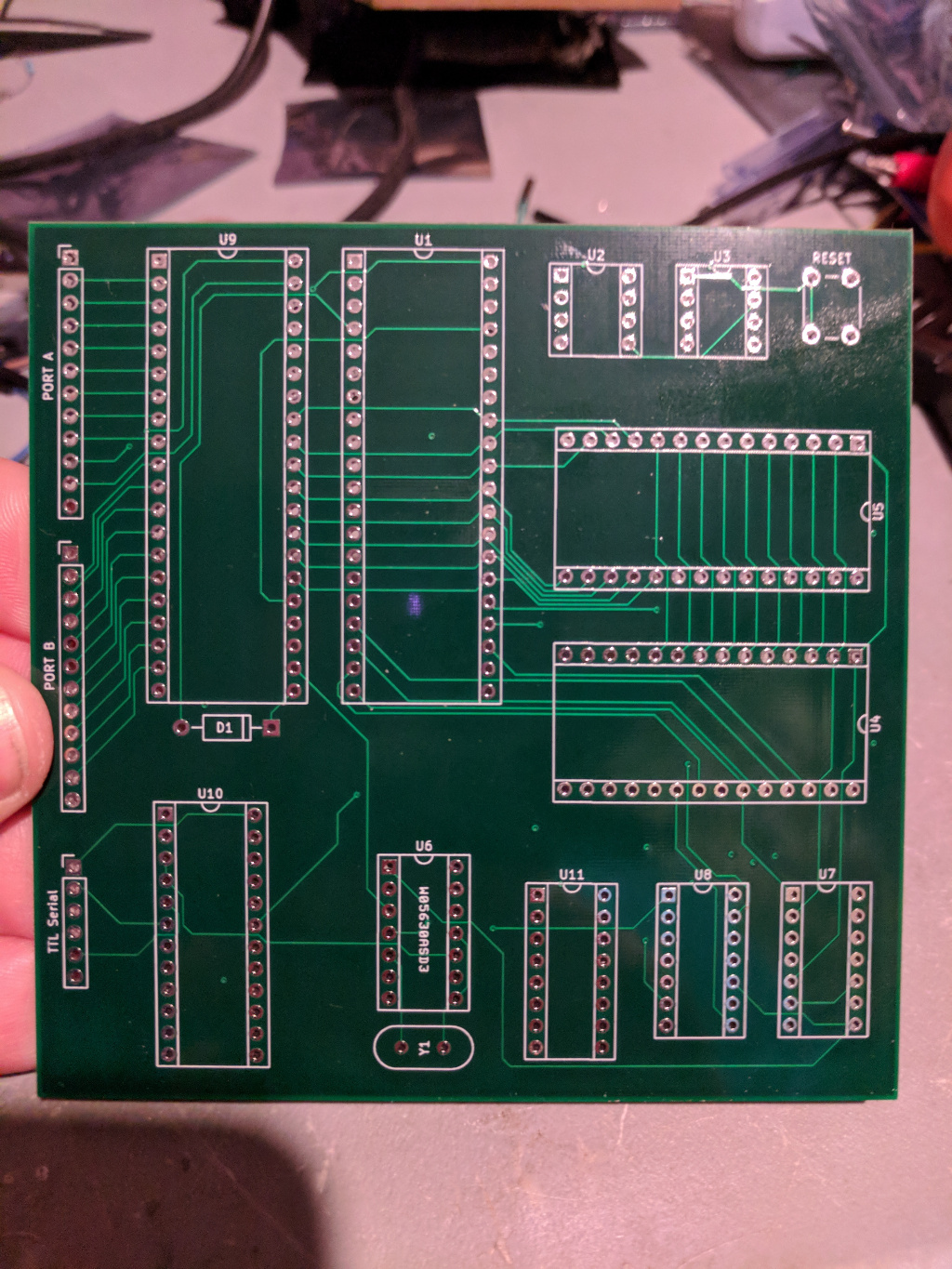 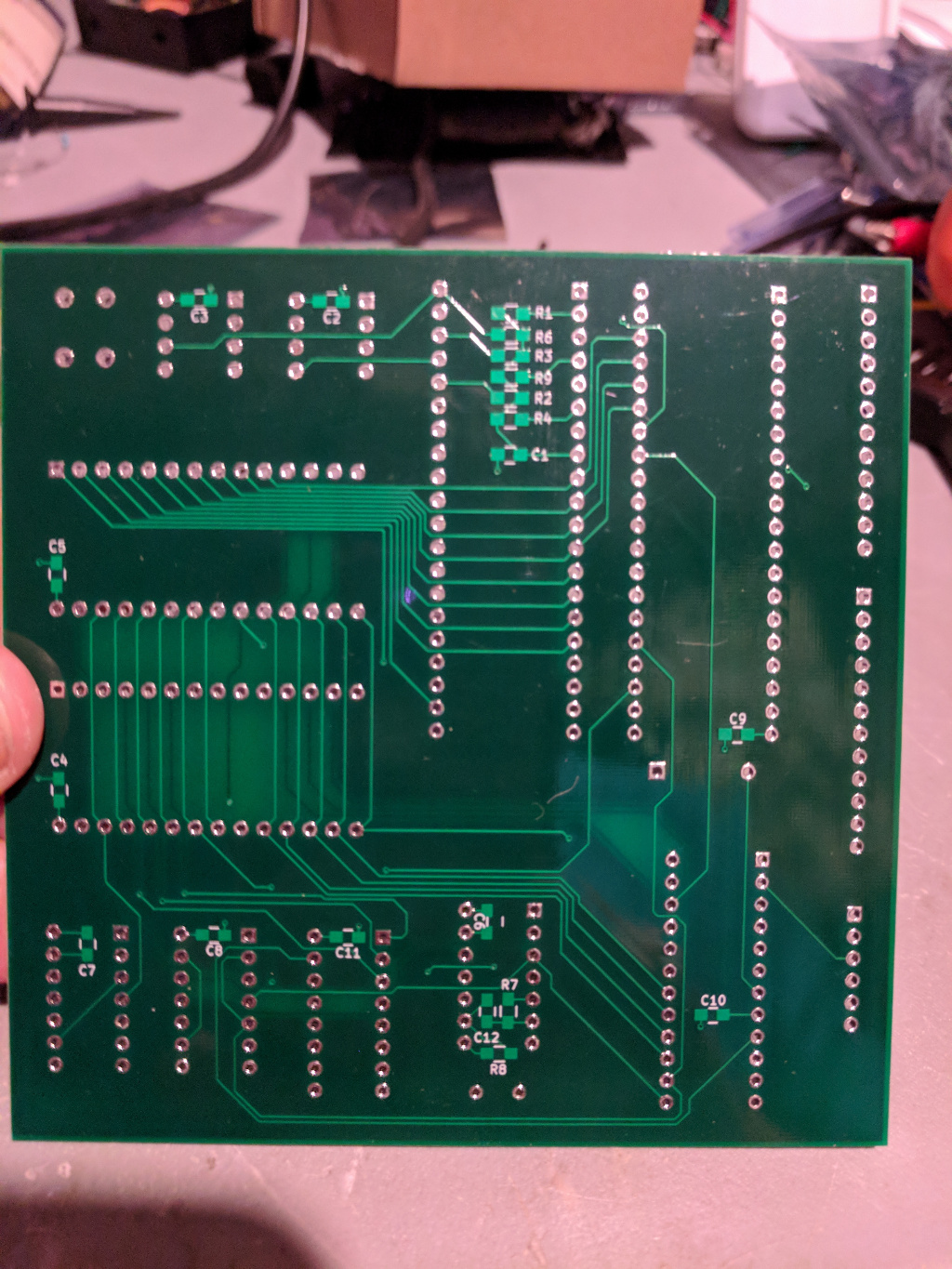 Careful observers will notice that there is solder mask over the pads for my surface-mount components; this is NOT the board house’s fault, because I see the same thing in the gerber file; somehow I goofed up my board layout in KiCad. Fortunately solder mask is pretty easy to remove with a sharp flat-head screwdriver, so I was able to correct this mistake.

The solder mask problem, however, was nothing compared to the other mistake in this layout: I accidentally picked the wrong footprint for the ACIA, which is the chip at the lower left corner of the board. What should have been a 24-pin, 15mm wide footprint ended up being a 10mm wide variant!

Rather than waste the boards I hacked together an ugly but functional adapter using a 24-pin socket, some perf board, and two strips of male headers. This turned out to be more of a pain than I had planned, due to the need to solder in some tight spaces, but I finally got it working and stable.

The moral here is always print your layout on paper and do a test fitting with your actual components before sending your layout to the fab house!

The firmware for this board is very much a work in progress.  The system currently boots into a customized version of Enhanced BASIC; from there, you can run the ‘SYS’ command to drop into my home-brew system monitor.

The monitor is loosely based on the Apple II system monitor (since I grew up using it), but currently has only minimal functionality. You can view (but not modify) memory, disassemble code, and do Xmodem transfers to and from memory. The upload function is very handy for rapid testing of new firmware; I can upload and run test code from RAM instead of having to pull the EEPROM and re-program it.

At the moment I am working on designing an add-on board that will provide VGA output and PS/2 keyboard input through one of the VIA ports, using a custom CPLD and an Atmega microcontroller. I’ll be blogging more about that project soon.

I have also been experimenting with a microSD card adapter that interfaces via SPI, with the intent of eventually implementing a full disk operating system (probably based on FAT-16). The problem is that my current hardware design doesn’t directly support SPI; I have written some code that bit-bangs it on a VIA port, but it’s not exactly fast, so  I am thinking about just tying one port to an atmega328p and using that as a parallel<=>SPI interface to get better throughput.

Eventually there will be a COLE-2, probably based on the 65816, and with more integrated peripherals. I had originally intended to start work on COLE-2 once COLE-1 was up and running, but I’ve decided to hold off for a bit and see how much I can add onto COLE-1 first.

The schematics, board layout, and firmware source code are all available in my GitHub repository.